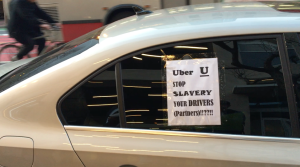 Today I got a last minute tip that Uber drivers would be staging yet another protest somewhere around the city of San Francisco. I packed my gear and headed to their meeting place at a designated parking lot at old Candlestick park. There I met up with Mario who organized today’s protest, and the most recent protest at San Francisco International Airports (SFO) TNC Lot on January 25th. I was quite surprised to see at least 100 plus Uber drivers in their cars prepared to hit the city of San Francisco in another Uber driver protest over ongoing fare cuts. I had a feeling this one was going to be a lot different then most protest I’ve covered in the past based on how many drivers showed up, and what appeared to be a more organized group of drivers as well. In fact something about the meeting being held at Candlestick park gave me a sneaky feeling that maybe Uber drivers plan to disrupt super bowl 50 in response to fare cuts as a major payback to Uber.

Mario gave me his game plan for the days event which was to lead drivers on a planned route hitting multiple strategic locations throughout the city with a caravan of drivers following close behind in a tight formation. First stop would be the SFO (San Francisco International Airport) staging lot where more drivers would be inspired and gathered up into to joining the rest of the gang as they headed Southbound on 101 toward the heart of the city  and the next pit stop scheduled.

Second on the list of stops was to hit up and circle around Uber’s Driver Support Center at 301 Vermont Street with Uber driver’s car horns beeping and blaring in an attempt to grab as much attention as possible. It seemed like the strategy to stop at SFO’s TNC lot first payed off as I swear there were now twice as many drivers than originally started at Candlestick park.

From Uber’s Support Center, drivers proceeded to City Hall, where again I met up with Mario as he was on a bullhorn blasting disappointment at invisible San Francisco leaders, and Ed Lee for turning their backs on an obvious issue drivers have been faced with by the city of San Francisco’s poster child, Uber, who’s been glorified for safer and affordable modes of transportation at the expense of the drivers. It looks like future protest will not only aimed directly at Uber, but City, State and Local Government, and regulatory bodies as well for not protecting the working class from what some drivers refer to as exploitative, greedy, corporate corrupt entity laced with egregious and questionable businesses practices.

It was at City Hall Mario mentioned to me his next ultimate game strategy where Uber drivers were planning to disrupt Super Bowl 50 on Sunday February 7th by slowing traffic on Highway 101 and I-280, and inundating Super Village near the ferry building, and the NFL Experience Event at the Moscone Center on 3rd and 4th st with this time thousands of uber drivers in protest. Some of those drivers I was told will be coming up from as far south as LA to join in the protest. Apparently, an Uber driver received a tip from an actual Uber employee that Uber was planning on offering a special fare promotion on Super Bowl Sunday by dropping the per mileage rates from $1.15 per mile to .50 a mile to help ease the surge pricing effect. I haven’t seen any emails yet for riders supporting the claim.

The final stop was Uber’s Corporate Headquarters located at 1455 Market St where drivers circled Uber’s office and surrounding area hoping get more attention from the media, and even perhaps a meeting with Ubers CEO, Travis Kalanick to negotiate increased fares, tip option in the app, and the end of surge pricing.

Considering all the challenges drivers have with Uber and Lyft it doesn’t seem to stop new drivers from signing up to drive with Uber especially being the new Uber driver sign up bonus offers are very enticing.

Lyft is offering a limited time only Lyft $50 Free Ride Promo Code to kick off Super Bowl 50 now running thru the end of February! This offer is good anywhere Lyft services are available. If you are a new user, download the Lyft app today and get $50 worth of free Lyft rides! Click Here to get rolling!